EN / RU
Nord Stream Race 2019: More Than Just a Competition
Expert Commentary: Alexey Zaytsev, Managing Director of Nord Stream AG
The largest Baltic offshore regatta, Nord Stream Race 2019, will take place from June 22 to July 5, 2019. It is organized by Saint Petersburg Yacht Club with the support of Gazprom as general partner and Nord Stream AG as a partner. However, the importance of the regatta today is not just as a sporting event, according to Managing Director of Nord Stream AG Alexey Zaytsev (A.Z.). This is much more than a sailing race, as he explained in this interview with a newspaper reporter from Business Guide (BG) Tatyana Kameneva 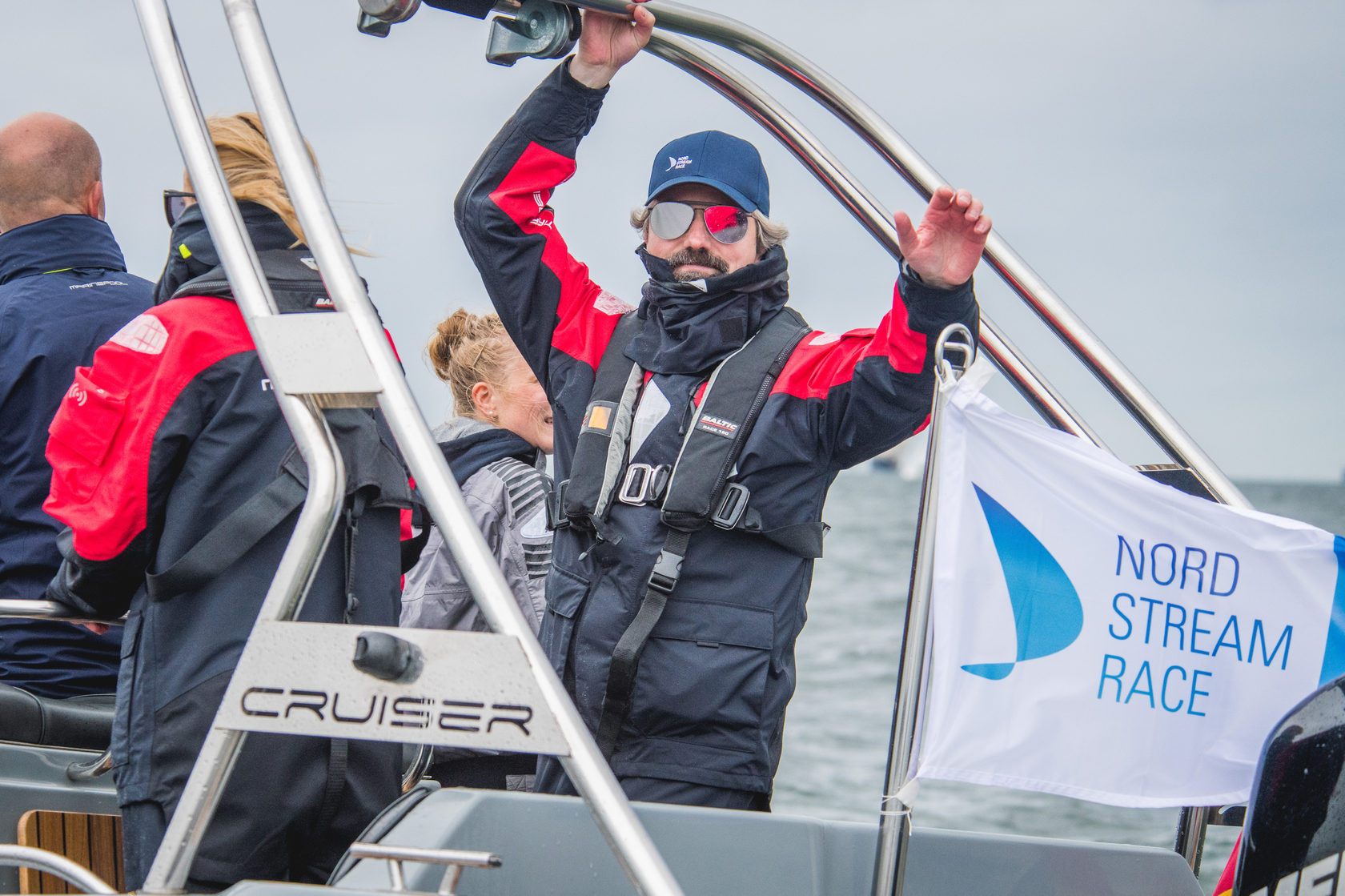 A.Z.: The distance of the race is 1000 nautical miles and travels along the Nord Stream pipeline. This makes Nord Stream Race the longest offshore regatta in the Baltic Sea and one of the longest in Europe. The race is divided into four legs: from the Northern German city of Kiel to Copenhagen, from Copenhagen to Stockholm, from Stockholm to Helsinki, and from Helsinki to Saint Petersburg. The motto of the race is "Sport unites the Baltic".

However, Nord Stream Race is much more than just a competition. The regatta unites the sport, culture, and business of five countries: Germany, Denmark, Sweden, Finland, and Russia. The events, happening during the race, have already become the meeting points of businessmen, politicians and public people. Former Chancellor of Germany Gerhard Schröder will participate in the starting events of the race in Germany this year.

BG: How did the competition start out?

A. Z.: Just like the gas pipeline with the same name, the regatta successfully serves the purpose of drawing Russia and Europe closer together. The Nord Stream Race took place for the first time in 2012 and coincided with the launch of the Nord Stream pipeline. Back then it was a regatta from Saint Petersburg to Germany without intermediate stops — a real test of endurance for offshore sailors! From the moment that the regatta was announced, 13 countries accepted the invitations of Saint Petersburg Yacht Club to participate in the race, including China, Turkey, and the UK. Since 2017, however, the race has been organized in a different format: the selection criteria of the participants, the fleet, the route, and regatta program all changed.

BG: How are the participants of Nord Stream Race selected now?

A. Z.: In the early years, only the representatives of the invited countries could participate in the race. Since 2017, only the winners of the national sailing leagues of five countries are able to take part: Germany, Denmark, Sweden, Finland, and Russia. The Nord Stream pipeline goes exactly through the waters and special economic zones of these countries. The change of selection criteria helped, first of all, improve the sports level of the participants and the regatta in general, and secondly it has attracted more attention to the race. These are the countries with a very well-developed foundation of club yachting. Every year, club teams compete at their national sailing leagues to become the best, and thousands of sailing fans follow it. Then the champions, whom people already recognize in each of the countries, win the right to compete at the international level – at Nord Stream Race, where they contest the title of the best club of the Baltic Sea. There are people who really follow the teams, who are their fans and supporters; that aligns exactly with the main idea of the regatta – to bring together the Baltic countries through the spirit of sport.

BG: What other important changes have been made to the race?

A. Z.: We changed the yacht class to a faster one — we moved from a fleet of cruising boats, the Swan 60, to the more exciting sports boats – the ClubSwan 50. As I have already mentioned, the route of the race has been the same in the last few years: Kiel – Copenhagen – Stockholm – Helsinki – Saint Petersburg. We increased the number of the legs and cities — it made the competition more attractive for spectators. When the boats sail into the city centers, people can interact with the sportsmen, go onboard and watch the competitions during the short inshore races.

BG: What is the organizing committee guided by, when choosing the route?

A. Z.: Each of the cities along the route is one of the maritime centers of Europe, where a lot of sailing events already take place, and the Nord Stream Race also becomes a part of that calendar of regattas. For the second year in a row, we are starting during Kiel Week – one of the largest sailing festivals in the world. In Sweden, our race leg start is planned to start together with the historical world-renowned race around Gotland Island – ÅF Offshore Race. And finally, the boats finish in Saint Petersburg during the Sailing Champions League of Europe.

BG: And what is the format of the racing?

A. Z.: There are short inshore races in each city along the route – taking place right in the city center. This provides an opportunity for anyone to come and watch the races live. After the races, people can visit the boats at a set hour – they can go onboard and talk to the sailors. Passages between the cities are offshore legs of the race. It is, perhaps, the most difficult part. Profound physical conditioning and stamina are required. Sometimes the passage lasts for almost two days, and not in the easiest weather conditions. You need to keep your boat and crew moving forwards, battling to the finish, always mindful of the changing conditions. At the end of Nord Stream Race, the teams receive three trophies: for the short city inshore races, for the open-sea passages, and the overall regatta.

A. Z.: We try to add something new each year, not only to the competition, but also to the cultural program. For example, seascape painters from different countries will paint pictures during Nord Stream Race 2019, which will be then sold at an auction at the finish of the race in Saint Petersburg. The proceeds will become a part of the prize fund of a charity race, which will be organized by Saint Petersburg Yacht Club during the Windsurfing World Championship in August 2019.

Young participants of Nord Stream Race will receive funding grants this season. They are intended for students under the age of 25. This money will cover the accommodation costs during the race. Each year, the regatta becomes more and more attractive for the youth, and we would like to support this trend.

BG: What teams are participating in the race this year?

A. Z.: Germany will be represented by one of the country's largest sailing clubs, Norddeutscher Regatta Verein. The royal yacht club Kongelig Dansk Yachtklub, which is the oldest in the country, will race under the national flag of Denmark. The oldest yacht club of continental Europe, Kungliga Svenska Segelsällskapet, which was established in 1830, will race under the Swedish flag. Finland will be represented by the team of the Åland Islands, Åländska Segelsällskapet. Russia will be represented by the team Leviathan, whose crew is made up of yachtsmen from Moscow and Saint Petersburg. To all the participants, I wish amazing team work, fair winds and following seas; and I wish that the Russian team will be able to demonstrate good results and take several trophies, as the team of Yekaterinburg Lord of the Sail – Asia did last year. The Russians won in several offshore races, as well as became the overall winners of the race.

BG: What changes do you anticipate for the race in future years?

A. Z.: Each year we try to expand the idea of drawing the Baltic Sea countries together, not only with the help of sport. We would like the cultural and sports programs of Nord Stream Race to be attractive for tens of thousands of Europeans, so we are planning to organize more activities during the race. We receive applications from other countries with wishes to participate in Nord Stream Race and we hope that the list of countries, whose teams will fight for the trophies of this competition, will become bigger in the future. The partners and organizers of the race, on their behalf, are searching for an opportunity to attract additional fleet for this purpose, because one of the great attractions of this race is that boats are provided to all the participating teams.